The Return of the Armchair Analyst

It’s that time of the season again, when we armchair analysts and wannabe coaches emerge from hibernation, give their opinions on why the team won or lost, and try to second guess how the team should be run during the UAAP tournament. Many of us fancy ourselves as brilliant analysts who can easily tell what went wrong during a loss, who did what when they shouldn’t have, what the Coach should have done in a particular situation, and much more. Oh well, hindsight is always 20-20. It’s too bad we can’t use hindsight to predict the future. And that’s the fun of it. If you knew the future, there wouldn’t be any challenge.

So I admittedly belong to that bunch who can’t help but dissect the games, guilty as charged. Ok, here’s this particular armchair analyst’s view of our game last Sunday.

We Lost, No Excuses

The Green Archers lost out to a taller and more experienced Ateneo team last Sunday, 73-79, after engaging the Blue Eagles in a nip and tuck game that was decided only in the last minute. Playing in front of an overflow crowd estimated at over 22,000, both teams battled on even terms, with no team able to maintain the momentum required to build up a sizeable lead.

What the Stat Sheet Tells Us

The Green Archers outshot their Blue Eagle counterparts from the long court, hitting 6 out of 17 attempts for a 35.3% clip, compared to the 1 for 7 performance of Ateneo. JV and James connected for 2 triples each, while Rico and LA hit one each. For Ateneo, only Tui was able to make one triple, out of his 3 attempts. Both teams connected on 21 field goals, but La Salle took more tries (52) compared to Ateneo (48). The higher percentage was probably due to Ateneo’s game strategy to force the ball inside, as well as our aggressive perimeter defense. In contrast, our big men spent a fair amount of time on the perimeter on offense, with Rico attempting thrice from the 3 point area and making only one. Interestingly, James was much more accurate with his treys, sinking 2 out of 3 while making only 1 out of 6 two point attempts. LA was 1 out of 1 from three point land, but missed all 4 of his two point attempts.

The most notable area where the Archers lagged far behind their opponents was in the free throws. Ateneo was given more trips to the line, 42 to our team’s 29. However, the Blue Eagles were steady from the foul line, making 34 while the Archers missed 16 for a 44.8% accuracy on these uncontested shots. The disparity in free throws was due to the 34 fouls called on the Archers, while Ateneo was whistled for 27 fouls. That accounted for the difference in attempts. Two of our fouls were technicals, for the ID issue and Rico’s supposed kick. Interestingly, out of Tiu’s 26 points, 17 came from the foul line while he shot only 9 from the field on a 4/11 clip.

Despite the clear height advantage of the Blue Eagles, our team almost achieved parity in the rebounding department with 41 caroms to the 46 of Ateneo. Rico, Jwalsh, and James accounted for 8, 7, and 6 boards respectively. Methinks Rico and Jwalsh could have collared more rebounds if they had stayed more around the paint. Big men Ferdinand and Maui only grabbed a rebound each. Our aggressiveness on the board resulted in an advantage in offensive rebounding, 16-14 in our favor.

Turnovers, traditionally a rich source of quick points for the Archers, only resulted in 10 points for us last Sunday off 12 Ateneo errors. That’s unusually low for an opponent, probably reflecting the importance the Ateneo coaching team gave to taking care of the ball. All turnovers were forced, showing that the pressure defense, even if not totally unveiled last Sunday, still creates problems for the opponents. The Archers had 10 turnovers, all forced. That’s low, but almost equal to the TOs we created. Points of turnovers were in our favor, 20-15, lower than usual. It looks like the Blue Eagles were prepared for our press. The “killer” version of the press did not really make its appearance in the form of aggressive traps. The quick hands of the Archer guards resulted in 5 steals against the 3 of Ateneo. 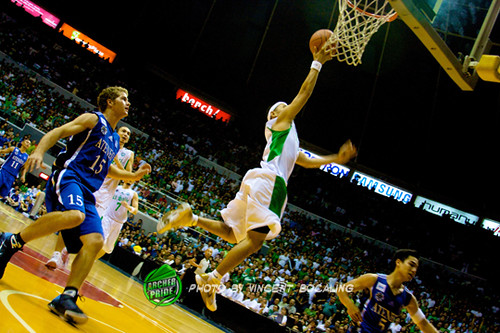 Assists were in our favor, 14-6, showing the importance of team play led by our guards. Simon tallied 4 assists, followed by JV, Rico, and James with 3, 2 and 2 respectively. For Ateneo, Tiu and Buenafe dished out 2 apiece, which is low considering the number of touches they had in the game. The low assist number of Ateneo reflected their reliance on individual plays such as Rabeh’s hook shots and Buenafe’s drives.

If I Were the Coach

Which I’m not, and I’m glad. It’s much nicer watching the game from the stands, since as an interested spectator and supporter, I can watch and cheer. But here’s my two cents’ worth anyway (which is practically worthless given prices today):

Defense – it worked well, but the players have to adjust to the referees’ calls. 34 fouls resulted in 42 Ateneo free throw attempts, and that’s too many. Anyway, the coaches will use the first round to scout the opponents, and this knowledge will be used to prepare the team for each game. Defense is a hallmark of  Green Archer basketball, so we can expect improvements as the tournament progresses.

Our bigs – If I had my druthers, I would make Rico play closer to the basket where he can use his hops and athleticism. On the perimeter, he’s several steps away from good rebounding position, and when he hoists those 3 point attempts, there’s very little chance he can help get the miss. I’d restrict him to maybe 1 attempt at a triple per game. JWalsh has improved from last year, but he has to remember to take it strong to the hoop. I still remember that unfortunate block on his fastbreak attempt. Ferdinand needs a bit more consistency and has to stay away from those fouls.

Our rookies – The rookies are fine, and as they get acclimatized to UAAP basketball, they’ll get better. There’s a tremendous upside to them. Of course, the lack of experience will resut in some mistakes, but we have to be patient and give them the room to grow. Only Manoj and Jovet did not see any action. Incidentally, let’s compare the performance of the rookies based on the game stats: Franz gave the four rookies 56 minutes out of the 200 minutes in the game. Coach Black fielded in only Buenafe, Burke, and Salva, and they accounted for only 31 minutes altogether. In addition to logging more playing time, our rookies outscored their more heralded Atenean counterparts, 17-13. In practically all areas, our rookies outplayed the trio that Black fielded in: steals 2-0; rebounds 6-4; assists 2-2; turnovers: 3-4; it’s only in blocks where we were outperformed, 1-2.  I can’t wait for our rookies to grow up.

Us (the supporters) – After observing Franz as our coach ever since he was appointed to the post, I can’t help but marvel at what he’s been able to do. He’s now arguably the best coach in the amateur leagues, and we just have to let him do his job. He knows what he’s doing. I’m not sure if he’s taken Covey’s 7 Habits, but he does seem to “begin with the end in mind”. His objective is the championship, and he had developed a system and process to get the team there. Notice how the team has a tradition of peaking in the second round? In past years, some of us almost had heart attacks with our record in the start of the second round, but he proved us wrong. Let him do his job, and let’s do ours, as we support the team all the way.

AN1MO! See you at the games.